An estimated 28,000 people participated in the Tilikum Crossing-Sellwood Sunday Parkways on Sunday, helping lift the event to an annual record turnout of 119,000 for 2015. 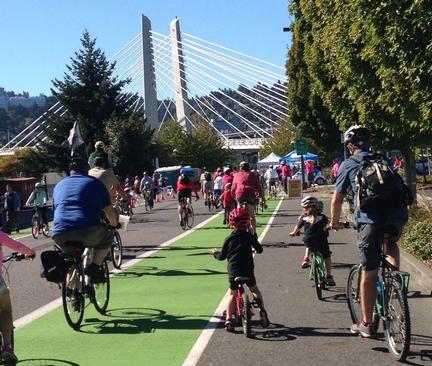 Great weather and the landmark opening of the Tilikum Crossing: Bridge of the People provided a huge draw for the event Sunday Sept. 27.

Sunday Parkways introduces Portlanders to biking as a transportation option by opening miles of streets to biking, walking and rolling. The routes are designed to introduce new bicyclists to neighborhood greenways, the low-traffic residential streets where the Portland Bureau of Transportation has prioritized safe, comfortable access for people riding bicycles. The events also offer an opportunity for residents to connect with each other, by volunteering their time to help with traffic, distribute refreshments and spread the word about community organizations.

Sunday’s 28,000 participants marked among the largest Sunday Parkways events. Only five of the 33 events held since 2008 have had a higher turnout. The highest was 31,500 at the North Portland Parkways event in 2011.

Growth in Sunday Parkways attendance in East Portland helped produce the record turnout this year, said Linda Ginenthal, who leads Sunday Parkways for the Active Transportation Division of PBOT. Attendance there has grown from 12,000 in 2010 to more than 16,000 this year.

“As we have done more community outreach in East Portland, there are more people who are riding and coming out to enjoy it,” she said. “It has built on the investments we’re making.”

Volunteers and sponsors make Sunday Parkways possible. About a third of the budget for the event, which takes place five times a year, comes from the City of Portland. The balance is funded by sponsorships, led by presenting sponsor Kaiser Permanente, as well as fees for participating organizations and businesses and donations from individuals. 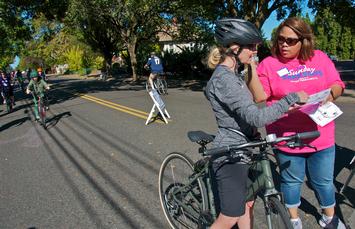 About 300 to 400 people volunteer their time for each event. Wearing pink shirts, some direct traffic, helping neighbors access driveways along the route. Others talk with the public about community organizations. A handful of “Superhero Coordinators” ride up and down the route, passing out snacks and water to volunteers and giving them pointers as needed.

“The only way we can do this is with our strong volunteer program,” Ginenthal said.

Sunday Parkways routes are designed to introduce people to comfortable routes for people new to biking. So they focus on neighborhood greenways rather than wider, busy streets.

“You won’t take your 8-year-old on Burnside or Sandy but you might take him on Northeast Going Street, or Southeast Ankeny or Bush Street in East Portland,” she said. “They are like Sunday Parkways every day.” 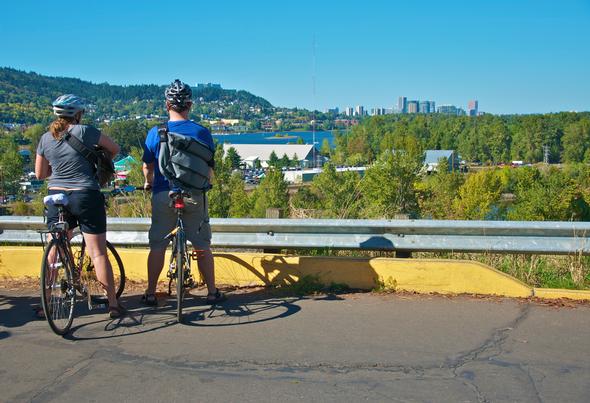 Planning for 2016 has already begun. Look for news about routes, sponsors and more in February.