“This is a tremendous start that shows Portlanders are eager to use bike sharing to lead more healthy, active lifestyles,” said Leah Treat, director of the Portland Bureau of Transportation, which owns the BIKETOWN bike share service. “From day one, BIKETOWN is one of the largest bike sharing system in the nation, and as it grows it will help reduce pollution and carbon emissions.”

Annual memberships for BIKETOWN cost $12 per month, giving members 90 minutes a day of riding time. Single-ride passes and 24-hour passes are also available for those who want to use the program more occasionally, including tourists. By Tuesday morning, more than 1,000 people had signed up for annual memberships. 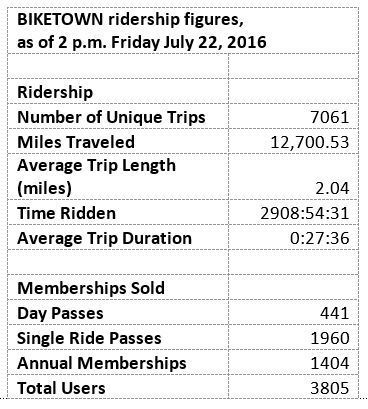 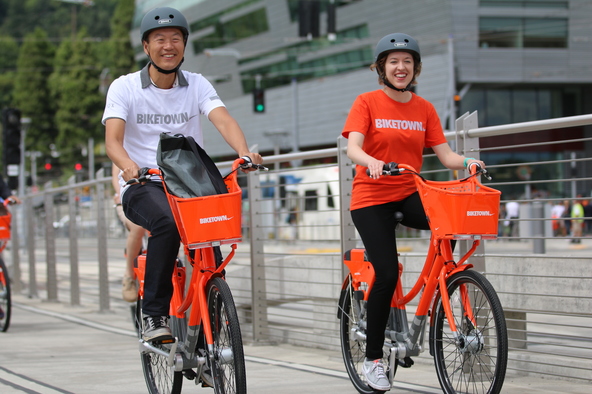 For links to photos and videos, including drone video of the opening celebration, see:http://www.portlandoregon.gov/transportation/article/584326

BIKETOWN is Portland’s bike share system, launching on July 19, 2016 with 1,000 bikes available to ride from one point to another for a small fee. BIKETOWN is a partnership between the City of Portland’s Portland Bureau of Transportation and Nike, the program’s sole title sponsor. BIKETOWN is operated by Motivate, the world’s leading bike share operator. It will use innovative new “smart bikes” which will make it easy to find, rent and park a BIKETOWN bike. BIKETOWN is designed to be affordable and accessible, encouraging even more Portlanders to ride and allowing visitors to experience the city by bike. Portland joins over 60 US cities, including New York, Chicago, Washington DC, San Antonio, Indianapolis, Boise and Austin and 500 cities worldwide that have popular, safe and successful bike share systems. biketownpdx.com

Nike believes in the power of sport and physical activity to help strengthen communities. As a longtime partner with the City of Portland, BIKETOWN highlights the company’s commitment to make Portland even more active, vibrant and innovative. As part of this collaboration, Nike designed the innovative visual identity for the program’s standard bike which is the highly identifiable orange that is synonymous with Nike. In addition, Nike oversees the design and branding of the system’s logo, stations and physical presence, as well as a select number of limited edition bike wrap designs, beginning with the Nike Air Max 95, Nike Air Trainer 1 and Nike Air Safari.

Motivate is a global leader in bike share. A full-service bike share operator and technology innovator, Motivate works to re-envision how people experience and move around cities. Motivate operates over 75% of the bike share fleet in North America, including the four largest systems in the US: Citi Bike in New York, Divvy in Chicago, Capital Bikeshare in the D.C. area, Bay Area Bike Share (San Francisco Bay Area) and Hubway in the Boston area. International Motivate bike share systems include Bike Share Toronto and Melbourne Bike Share (Australia). www.motivateco.com