(Aug. 19, 2016) The traveling public is advised to plan ahead for transit delays and street closures during TriMet’s Rose Quarter MAX Improvements project. The project will require the disruption of MAX Blue, Green and Red lines and reduced frequency on all lines from Sunday, Aug. 21 through Saturday, Sept. 3. The construction will close some streets, crosswalks and sidewalks in the Rose Quarter area on Saturday, Aug. 20 through Wednesday, Sept. 7.

TriMet is advising riders to alter their trips to avoid the main commuting hours or use other transportation options such as TriMet regular bus service, Portland Streetcar, or consider biking and walking options, including the BIKETOWN bike sharing system during the two-week project.

People biking or walking in the area are encouraged to use NE Multnomah Street, which has protected bike lanes and sidewalks. The BIKETOWN bike share program is a convenient option for MAX riders needing to reach downtown, the Central Eastside, or other destinations in central Portland.

BIKETOWN has created a special $1 off promotion for new users who are looking for options during the MAX improvements project. A discount code: CONNECT1 is good for $1 off a Single Ride pass for new users only. Valid thru Sept. 4, 2016.

The best way to use this code is to set up an account in the mobile App.

People interested in using BIKETOWN can download the app in the App Store or Google Play, set up an account on BIKETOWN’s website or sign up at any BIKETOWN kiosk. The closest Rose Quarter kiosk is located in front of the Oregon Convention Center at NE Holladay at MLK. A detailed BIKETOWN system map can be viewed at: www.biketownpdx.com/map 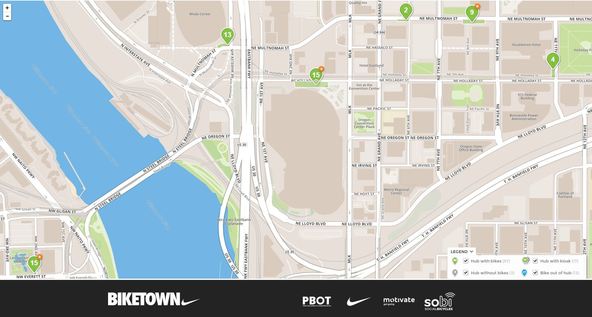 In addition to the MAX station closures, the following streets will be affected:

The traveling public is advised to expect delays. We ask the public to travel cautiously, observe all lane closures and directions by reader boards and flaggers, and use alternate routes if possible.