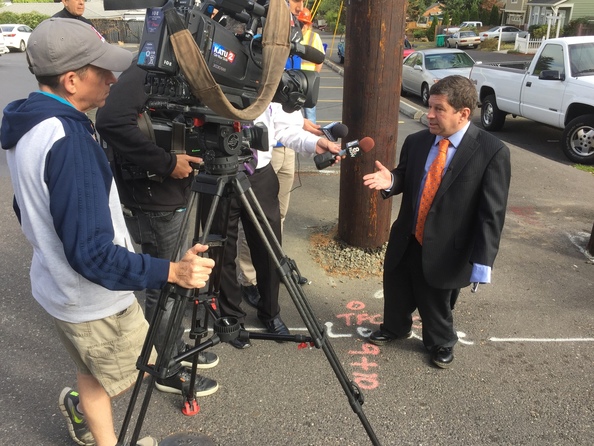 Transportation Commissioner Steve Novick speaks at the site of an upcoming sidewalk installation at a TriMet bus stop on NE Prescott. Photo by Portland Bureau of Transportation.

After hearing from East Portland community members that improved bus service was a top priority, Commissioner Steve Novick discussed the community’s needs with TriMet. Novick found that many of the sidewalk and crosswalk projects in the East Portland in Motion Plan would make it easier to get to transit and potentially improve bus ridership.

"I heard repeatedly four years ago from residents of East Portland that improved bus service on 122nd was a priority. I first raised the issue with TriMet in February of 2012, and at that point they didn't see an immediate path to more frequent service. Subsequently, however, TriMet said that they could more easily justify service improvements if we were able to make safety improvements along the route to make it easier to access bus stops—the same kind of safety improvements that East Portlanders have been advocating for years. We have now committed more than $6 million to make those improvements, on last year's budget and through the Fix Our Streets measure—and TriMet is delivering on its promise. Today, we celebrate years of work and collaboration by TriMet, the City, and especially the people of East Portland."

“When looking at expanding service, we also look for ways to increase the overall access to transit, including sidewalks and safe crossings,” McFarlane said. “This partnership is allowing TriMet and PBOT to improve mobility, transit access and safety for riders, who are pedestrians first and last for every trip.”

The improvements are part of PBOT’s effort to achieve Vision Zero, the goal of eliminating fatalities and serious injuries from our streets. The approach includes changing street design so mistakes made while traveling do not result in deaths or serious injuries. It also includes education and enforcement efforts that have been shown to reduce fatalities.

“Commissioner Novick has shown great leadership on Vision Zero,” Treat said. “The funding he secured from the City Council for sidewalks and safer crossings on this High Crash Corridor will be a great step in our efforts as a Vision Zero city. Thanks to East Portland community advocates and collaboration from TriMet, we are making it safer for people to walk and take transit, which will reduce pollution and give people healthier transportation options.”

PBOT’s 122nd Avenue Area Safety Improvements project is investing $3.1 million in sidewalks and safer pedestrian crossings along a 6-mile corridor from NE Prescott Street to SE Foster Road, with construction from fall 2016 through fall 2017. Sidewalk improvements, new pedestrian islands and new rapid flash beacons are targeted at locations that will improve access to public transit and reduce the likelihood of fatal crashes. Learn more at the project web site.

The Fixing Our Streets program will fund additional improvements in the area, with funds approved in May when voters passed Measure 26-173, the four-year, 10-cent Portland gas tax. Over the coming years, as capital investments are completed, TriMet will continue to roll out additional bus service enhancements until Frequent Service levels are reached on the Line 73-122nd Ave. Once complete, the Line 73 will join the MAX and the other 13 designated Frequent Service bus lines that offer 15-minute of better service intervals.

TriMet’s Frequent Service lines—which carry roughly 58 percent of all bus trips—connect the regional hubs where many riders live and work. In addition to providing more frequency, these lines have a number of features designed to make trips easier, faster and more comfortable including new shelters and sign poles, ADA-compliant landings and curb ramps, bus stop re-spacing and curb extensions, and improved pedestrian access.

PBOT includes 122nd Avenue among the city’s 10 High Crash Corridors. The rate of pedestrian crashes is about 50 percent higher than the citywide average. The average distance between pedestrian signals or median islands is more than a quarter mile, or about 1,400 feet.