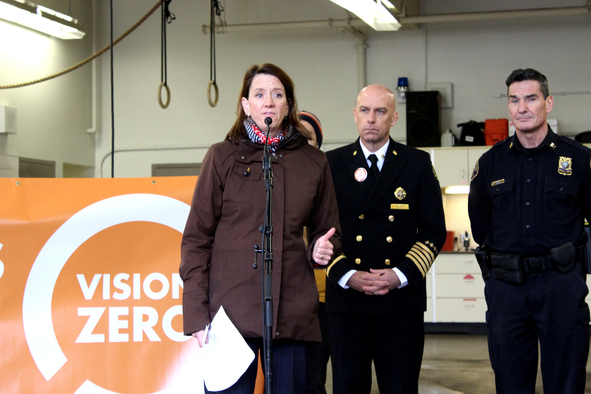 Director Leah Treat shared a list of safety projects on the city’s High Crash Network streets and intersections that will go to construction 2017 as part of Portland’s Vision Zero Action Plan. “Our partnership with the Fire Bureau and Police Bureau is absolutely paramount to the success of Vision Zero,” she added.

Portland Fire & Rescue Chief Mike Meyers reiterated his bureau’s commitment to partnering with PBOT and supporting Vision Zero by using safety messages and education to reduce the likelihood of serious injuries and fatalities on Portland's streets.

“There is nothing more to the Portland Fire Department than to reduce deaths in general and reduce these traffic deaths,” said Chief Meyers.

“This weekend, do not drink and drive. If you cause a crash while drinking and driving and someone is seriously injured or killed, you will be going to prison,” said Captain Mike Crebs of the Portland Police Bureau. “I see the tragedy involved in these crashes. It is devastating to walk to someone’s house and let them know their loved one was killed in a crash.”

The Police Bureau has pledged their continued commitment to partner with PBOT on crosswalk enforcement efforts as well as traffic safety missions, partnering with each of the three police precincts. Additionally, the Police Bureau will continue to proactively message safety information to reduce the likelihood of injuries and fatalities on Portland streets.

Officials urged the public to make good choices when celebrating the new year this weekend by taking TriMet, a taxi or ride-hailing service or choosing a designated driver for the evening.

Looking ahead to the 2017, the biggest safety improvement will take place on Southeast Foster Road between 50th Avenue and 90th Avenue. The Foster project is a $5.8 million, federally funded project that will add wider sidewalks, safer crossings, street trees and bike lanes to improve safety, especially for people walking, biking and using mobility devices.

Enhanced sidewalks and crossings are nearly complete on East Burnside Street, and will be finished by next summer on 122nd Avenue, Southeast Foster Road and Northeast Sandy Boulevard Portland City Council provided $5.6 million in general funds for the work in 2015. In addition, safety projects are wrapping up on 82nd Avenue and Southeast Powell Boulevard Both projects include additional lighting, updated curb ramps and signals, and enhanced crossings. ODOT is planning two additional safety projects for Powell Boulevard that will be constructed after 2017.

On West Burnside, PBOT will make significant safety improvements where 18th Avenue, 19th Avenue and Alder Street meet. PBOT is also building a new sidewalk in 2017 along the north side of West Burnside between 24th Avenue and Uptown Terrace. Both projects use $3.6 million in system development charges. In 2018, PBOT will install a new traffic signal at West 20th Pl.

On Southeast Hawthorne Boulevard and 43rd Avenue, PBOT will install new crosswalk signage and markings and a temporary median island in the coming weeks, and will construct a permanent median island in the spring when warmer weather allows. The changes follow a traffic death at this location in 2016.

The Fixing Our Streets program, the result of the passage of Measure 26-173, will also help move forward safety projects across the city. PBOT will spend $200,000 on sidewalk infill along Northeast 102nd Avenue from Sandy Boulevard to Interstate 84, with construction set for 2017. A $330,000 corridor treatment, yet to be scoped, is planned for 2018 along Northeast 102nd Avenue. Both projects are funded through Fixing Our Streets.

Fixing Our Streets will provide an additional funding for better lighting and enhanced crossings in 2017, including street lighting infill for multimodal safety to provide street lights at up to 25 locations to improve safety for vulnerable street users traveling on Portland’s High Crash Network.

Portland is committed to ending traffic violence in our communities. Through the Vision Zero program, the City of Portland and our partners are working to eliminate deaths and serious injuries on our streets by 2025.