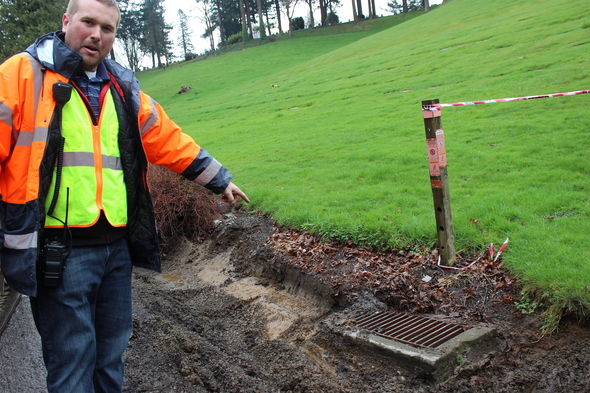 PBOT crew member Shawn Castrapel shows an area where stormwater was not draining properly into a city storm drain. Improvements to drainage in the coming days will prevent West Burnside from deteriorating and reduce the need for future road closures for maintenance. Photo by Hannah Schafer, Portland Bureau of Transportation.

(4 p.m., Tuesday, March 21, 2017) – The Portland Bureau of Transportation advises the traveling public that West Burnside Road is expected to remain closed at least through Friday afternoon. The soonest the roadway will be reopened is 4 p.m. on Friday, March 24, after crews work to repair and improve the road after a recent landslide.

Crews may reopen Burnside at 4 p.m. Friday, but the work is weather dependent, so the schedule may change and the closure may last longer.

Crews undertaking multiple repairs to improve the condition of West Burnside this week. They are repairing two sinkholes and several potholes. They are improving drainage in areas where stormwater was not draining properly into roadside storm drains.

In addition, there are several places where the base underneath the pavement has been compromised and needs to be replaced. When roads need such base repairs, they often appear to have wavy surfaces that distract drives, collect rain and form potholes.

PBOT is also using this closure as an opportunity to replace the top layer of pavement. Repaving the street will prevent potholes from occurring and prevent the need for a more expensive rebuild later on.

"We don't want to have to come back and repair West Burnside again in two weeks,” said Suzanne Kahn, maintenance operations group manager for PBOT. “With a few more days, we can leave the road in condition that will last one more decade rather than a few more weeks."

Crews are assessing what damage resulted from the slide and what stems from poor pavement condition. Crews from Portland General Electric and other utilities have been in the area this week, locating and protecting their infrastructure as PBOT crews dig into the roadway to make street improvements. 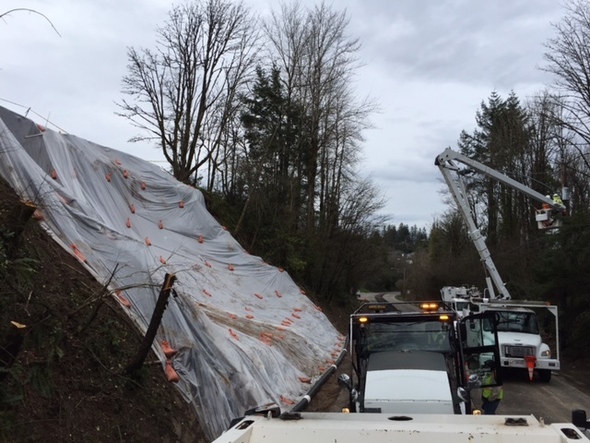 Crews from Portland General Electric as well as PBOT worked in the area of the West Burnside landslide. This photo is from Monday March 20. Photo by Linda Goheen, Portland Bureau of Transportation.

The largest landslide to affect a Portland street this winter occurred at about 7 a.m. Wednesday, March 15. The road has been closed since then.

The public should stay away from the area until PBOT crews decide to reopen it. West Burnside is closed to people biking, walking or driving between NW Skyline Blvd and SW Barnes Road, near the Mount Calvary Cemetery. People driving through the area are encouraged to use U.S. 26 or NW Cornell Road as alternate routes, or consider public transit.

Winter storms and spring rain have taken a toll on hills in the Portland area. PBOT crews have responded to 42 landslides this season, through March 15.

The public should stay away from the area. We ask travelers to observe all street closures and directions by reader boards and flaggers, and use alternate routes if possible. 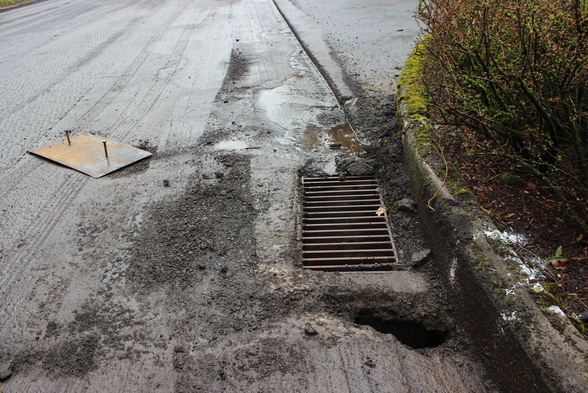 PBOT crews are repairing multiple sinkholes today on West Burnside, including this one beside a storm drain. Such repairs will improve the road's condition and reduce the need for more expensive rebuilds and road closures in the future. Photo by Hannah Schafer, Portland Bureau of Transportation.