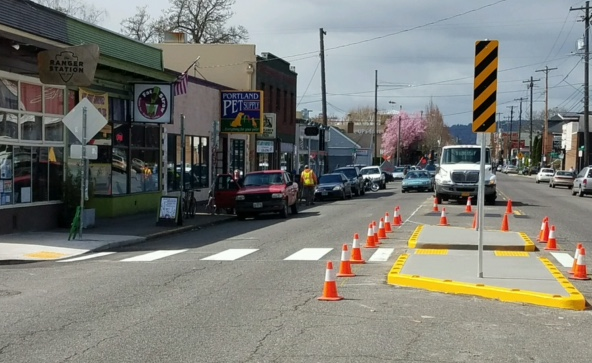 A new crosswalk and median refuge island at SE 43rd and Hawthorne. Photo by Kirstin Byer, Portland Bureau of Transportation.

(March 31, 2017) The speed limit on SE Hawthorne Boulevard from SE 30th Avenue to SE 50th Avenue has changed from 25 mph to 20 mph and a new crosswalk is in place at SE 43rd Avenue as part of a series of safety improvements completed by the Portland Bureau of Transportation’s (PBOT) Traffic Maintenance and Operations crews along the business corridor.

The changes are the result of recommendations from a traffic crash investigation in 2016, after a young person was struck and killed while legally walking across SE Hawthorne at SE 43rd Avenue. In addition to a new crosswalk and speed change, PBOT crews constructed new ADA compliant curb ramps and a median refuge island at SE 43rd. They also moved parking away from corners at key intersections along SE Hawthorne to increase visibility and provide bike access to pedestrian signal buttons. Finally, striping crews restriped street markings throughout the corridor early this morning.

“This is another important step towards making Portland safe for all,” said Transportation Commissioner Dan Saltzman. “I appreciate the Hawthorne business community’s support for this project and look forward to working with other business districts to create safer conditions for people walking, biking, rolling and driving.”

“Hawthorne is one of the more deadly streets in the City. This was underscored by the tragic loss of a young and shining star in our community last year," said Transportation Director Leah Treat. "PBOT is committed to Vision Zero and continues to deploy known methods to create safer streets across the city. This includes lowering speeds, building pedestrian refuge islands, and partnering with the police for enforcement of the most dangerous driving behaviors.”

The new median refuge island at SE 43rd supports safety for people walking. The new midpoint crosswalk focuses crossing activity in one location, making crossing simpler. Left turns onto SE Hawthorne from SE 43rd will no longer be allowed and will reduce crash risk for all street users at the intersection.

More than half of deadly crashes occur on just 8 percent of Portland's streets. Portland’s Vision Zero Action Plan identifies 30 streets and 30 intersections across the city that make up the High Crash Network. SE Hawthorne is one of the streets on Portland’s high crash network. From 2005 to 2014, one person died and nine people were seriously injured while traveling on the one-mile stretch of SE Hawthorne between SE 30th and SE 50th Avenue. In all, there were 420 crashes involving 881 people on the one-mile segment of Hawthorne from SE 30th Ave to SE 50th Ave.

Under state statute (see ORS 811.111) PBOT has the authority to request speed limits of 20 mph in business districts and 25 mph in residential areas. As part of its Vision Zero effort, the bureau is using that authority where needed to meet both Vision Zero goals and the intent of the statute, in this case a business corridor. PBOT’s request to rescind the set speed and replace it with the statutory speed on SE Hawthorne was granted by the Oregon Department of Transportation in mid-March.