The goal of the Speed Safety Cameras is to reduce speeding and save lives. Both SE Division Street and SE 122nd Avenue are part of Portland’s High Crash Network of roads. On these roads, people walking along or crossing on foot are twice as likely to be struck by a car than on the average city street.

The Speed Safety Cameras started issuing warnings on March 6th, and the 30-day warning period ends today, April 4th. Those drivers who exceeded the speed limit and were photographed by the cameras during this period received warning letters alerting them to their violation of the speed limit.

There is already evidence that the average speeds of vehicles travelling on SE 122nd Avenue and SE Division have decreased substantially.

● Before the cameras were installed, an average of 715 vehicles traveled 45 mph or faster on SE 122nd Avenue.

●  After the cameras were installed, an average of 61 vehicles drove 45 mph and faster along SE 122nd Avenue reflecting a 91% decrease from the speed survey.

●  Before the cameras were installed, an average of 1,762 vehicles traveled 10 mph and more over the posted speed limit on SE Division Street.

●  After the cameras were installed, an average of 514 vehicles drove 40 mph and faster along SE Division Street reflecting a 71% decrease from the earlier count.

“I am very heartened by the early results from the speed safety cameras on Outer Division and SE 122nd," said Transportation Commissioner Dan Saltzman. "These cameras work. They reduce speeding and by doing so, they are helping to make some of our most dangerous streets safer for all users.”

"Like the speed safety cameras we installed last fall on Beaverton-Hillsdale Highway, the cameras on SE Division and SE 122nd have had an immediate impact," said Transportation Leah Treat. "We are so focused on reducing speeding because it is one of the most significant contributing factors to deadly and serious crashes on our streets. If we can get people to slow down, we can save lives. It's that simple." 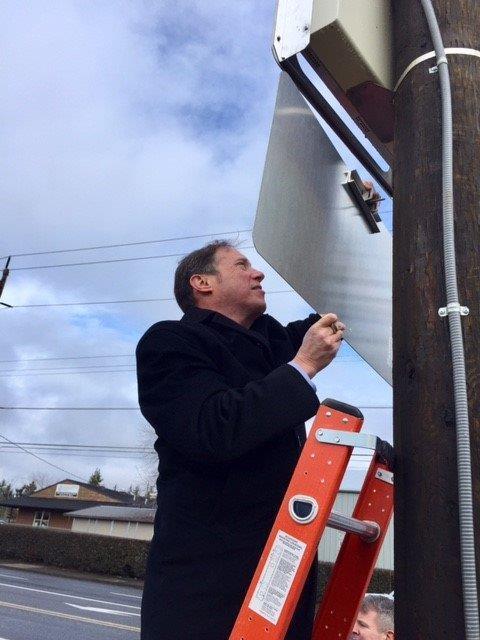 The speed safety cameras on SE Division and on SE 122nd are the result of the 2015 passage of HB 2621, which allows them to be used on High Crash Corridors in the Portland city limits. The first cameras in Portland were installed on SW Beaverton-Hillsdale Highway in the fall of 2016. The City of Portland has been using other cameras to supplement speed enforcement for years, with police officers in vans enforcing speed limit violations. Portland also uses cameras to increase enforcement compliance with red lights at traffic signals.

When people exceed the posted speed limit while driving past the safety cameras, the camera systems capture photos and video for review by Portland Police. An officer from the Portland Police Bureau will review violations before a citation is issued. Penalties are the same as a speeding violation initiated by any other means. The typical speeding citation in Oregon is a Class C violation (11 to 20 mph in excess of the speed limit) resulting in a $160 fine. HB 2621 requires that money received from the speeding tickets can only be spent to cover the cost of the program or pay for safety improvements and programs on High Crash Corridors. PBOT plans to install additional speed safety cameras on NE Marine Drive later this year.

The Speed Safety Cameras program provides ample warning to people driving in the area. State law requires speed signage and speed reader boards to be installed on the street warning drivers more than 100 yards in advance of the cameras in both directions.  Speed reader board displays a driver’s current rate of speed providing immediate feedback in advance of the fixed speed safety camera. PBOT staff also conducted extensive outreach with local neighborhood associations, community organizations and businesses through mail, meetings, visits and community radio to raise awareness of the changes along the two corridors, before the cameras were installed.

Along SE Division, projects include:

● Expansion of the East Portland In Motion (EPIM) buffered bike lane project on outer SE Division St to a multi-modal safety project, with focus in the Jade and Division Midway Alliance Districts.

● Installation of additional speed reader boards at four locations from SE 82nd to the city limits to educate drivers and reduce speeding.

The City of Portland has joined cities around the country in embracing Vision Zero – the notion that the death of even one person on our roads is one too many. Vision Zero prevents traffic deaths through smart policy and system design. Learn more about Vision Zero and Speed Safety Cameras by visiting www.visionzeroportland.com.