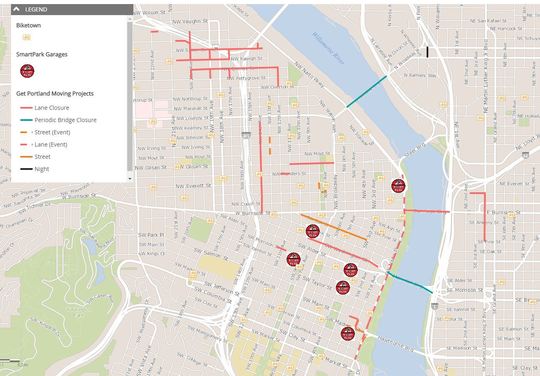 Click to view a map of current and upcoming traffic impacts in Portland's Central City.

(June 21, 2017) As summer officially begins, downtown Portland streets are busy with construction and event activity. To help Portlanders and visitors plan their travel, the Portland Bureau of Transportation advises the traveling public that the following events and construction projects will impact traffic in downtown Portland in the coming days and weeks:

A calendar of the various traffic impacts can be viewed online here.

Don't forget, during construction Downtown Portland is open for business! To avoid circling around construction to find parking, the City recommends you use SmartPark garages. In addition, BIKETOWN is offering a free ride to help people avoid traffic congestion. Use the code MOVEPDX17 to receive one Single Ride pass, good for a 30-minute trip. Redeem the free ride at biketownpdx.com or by using the BIKETOWN app.

With numerous projects planned for the Central City this year, the City of Portland, together with our agency partners, is leveraging opportunities to identify efficiencies and coordinate projects. Our cooperation will increase the safety and mobility of traveling Portlanders, including pedestrians and cyclists. Learn more at www.movepdx.net.