News Blog: Emerson Street Block Party is a shining example of Portland in the Streets 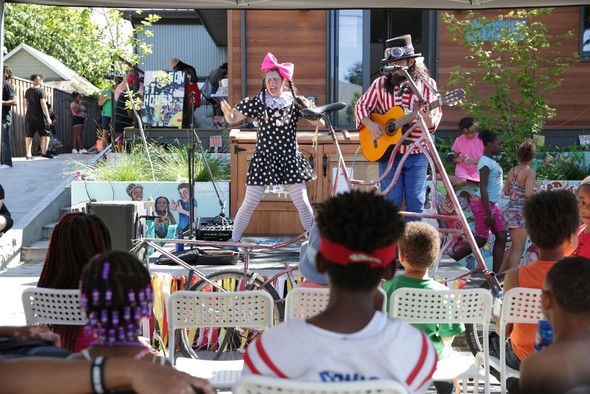 The June 23, 2017 block party, hosted by Nikki the Brown Clown, featured many local performers participating in games and activities throughout the afternoon. Photo by Nico Lim, Portland Bureau of Transportation

(July 11, 2017) Portland summers are a welcome respite from the rainy days that occur for most of the year. It is during the summer that Portlanders take full advantage of the sun, and come together to celebrate their communities. Such was the case on Friday, the June 23, when artists, families, and community leaders gathered at a block party in front of the Emerson Street House, which opened about a year ago under the coordination of Diane Freaney and Sabin CDC, in Northeast Portland. 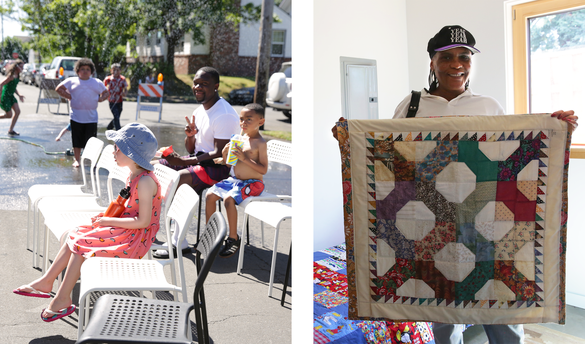 Right: Block partygoers grabbing a seat before the round of performances that occurred at the Emerson street block party. Left: Portland-based textile artist Joanne Green with pieces that live at the Emerson Street House. The block party was frequented by many local artists and creatives that participate in events and activities at the house throughout the year. Photos by Nico Lim, Portland Bureau of Transportation

This was the second year that Nikki Sandoval, also known as Nikki Brown Clown, a Portland-raised jack-of-all-trades, has coordinated a block party for her former neighborhood on Emerson Street. 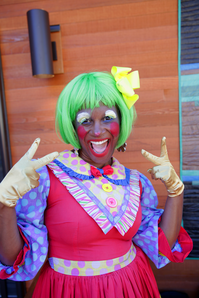 Nikki is currently based in California, but was able to apply for her block party remotely using Portland Bureau of Transportation’s new online application. For Nikki, her Portland community is greatly important to her; the same can be said for the families and creatives that have been touched by her passion and dedication to empower local youth.

The block party on Emerson Street happened on a hot Friday afternoon. The street was closed off to vehicles allowing for sprinklers, performances, and face painting (among other activities) to occur in a space that is otherwise perceived as site for moving cars. Hosting a block party is a great way to empower communities who can reclaim their neighborhoods for pedestrian use. Block parties such as these remind us that creativity, diversity, and community are truly what makes Portland such a special place.

To learn more about Sabin CDC, go to their website at www.sabincdc.us

Learn how you can host your own block party at www.pbotblockparty.com