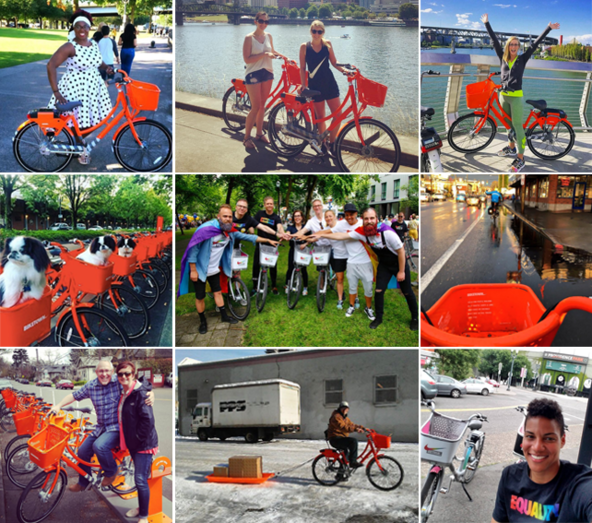 A collection of images shared by BIKETOWN riders on Instagram using the hashtag #BIKETOWNpdx.

(July 17, 2017) Today, BIKETOWN and the Portland Bureau of Transportation kick off a week of special events and activities to celebrate the bike share program’s first birthday. Starting today and culminating on July 23 at the Northeast Portland Sunday Parkways, BIKETOWN will be hosting a variety of events and activities to celebrate the program’s first year. The largest of the events will take place on Wednesday, July 19, BIKETOWN’s birthday, when Portlanders and visitors will be able to ride BIKETOWN for free for the day. Free Ride Day is sponsored by Metro.

Among the other activities taking place over the course of the week are special commuter stations along popular bike routes, a Stumptown cold brew giveaway, and a presentation at Portland City Hall on the BIKETOWN for All program. On Wednesday’s Free Ride Day, people can earn one free Day Pass for up to three hours of biking when they sign up using an online form.

“BIKETOWN has been transformational for Portland,” said City Commissioner Dan Saltzman, who oversees PBOT. “The orange bikes have made it easy for locals and visitors alike to experience the world class network of comfortable bike routes that generations of Portlanders have built. I look forward to watching BIKETOWN continue to grow in the coming years.”

This past year, 75,521 BIKETOWN riders have biked 602,266 miles. Among the riders enjoying the bright orange bikes are some of Portland’s star athletes, CJ McCollum of the Portland Trail Blazers and Portland Thorns’ Goalkeeper Adrianna Franch. Other notable riders have included Grimm star David Giuntoli and Mayor Ted Wheeler, who rode a special Pride-themed bike in this year’s Pride Parade. And dozens of “dogs of BIKETOWN” have taken rides in the famous BIKETOWN basket. On social media, people have shared their experiences riding around the city, some learning to ride a bike for the first time, others discovering new neighborhoods and businesses, and some even using BIKETOWN bikes to haul cargo and get around town during this past winter’s many snow storms.

“BIKETOWN is helping Portlanders make the shift to cycling,” said Leah Treat, director of PBOT. “Not only is it bringing in new riders (as well as adorable dog and cat passengers), but BIKETOWN has already become a part of Portland’s many bicycle traditions, like Sunday Parkways, Pedalpalooza and the World Naked Bike Ride. That tells me that this program is here to stay.”

In the course of its first year, BIKETOWN has already grown and spread its reach to new communities.

The launch of BIKETOWN for All, a membership program that offers discounted memberships to Portlanders living on low incomes, in the fall of 2016 added 130 new members to the system. Three of the top ten BIKETOWN riders for both mileage and trips are BIKETOWN for All members, a testament to its value. The BIKETOWN for all program is a partnership between the Community Cycling Center (CCC), PBOT, Motivate, the Better Bike Share Partnership, and participating affordable housing communities, social service agencies and local nonprofits.

This May, BIKETOWN launched two super hubs where users may park a BIKETOWN bike at any public rack without an additional charge. The hubs are located in the Central Eastside Industrial District and the PSU campus.

“Nike believes in the power of sport to unleash human potential and build community, and BIKETOWN beautifully embodies that spirit here in Portland,” said Jorge Casimiro, Nike Vice President of Global Community Impact. “We’re excited to celebrate BIKETOWN's first birthday, and are proud of the milestone moments we have marked together with the City of Portland and the Portland Bureau of Transportation--from the launch of the iconic orange Nike shoebox design of the BIKETOWN bike, to the release of three limited-edition bike wraps representing legendary sneaker designs and two designs reflecting the BETRUE call-to-action celebrating the LGBTQ community in June. It’s an honor to help make Portland an even more vibrant, active and innovative culture.”

BIKETOWN is sponsored by Nike, Inc. Nike’s title sponsorship of the program allowed the City to expand the initial number of bike share bicycles available to the public at its launch and put the system on a trajectory of sustainable, long-term growth. The system was able to launch with 1000 bikes, a 66 percent increase from the original program authorized by Portland City Council.

Casual Members (people who have signed up for a day pass, single ride or other short-term plans): 72,002

Average trips per bike per day since launch: .95

BIKETOWN is Portland’s bike share system, launched on July 19, 2016 with 1,000 bikes available to ride from one point to another for a small fee. BIKETOWN is a partnership between the City of Portland’s Portland Bureau of Transportation and Nike, the program’s sole title sponsor. BIKETOWN is operated by Motivate, the world’s leading bike share operator. It uses innovative new “smart bikes” which make it easy to find, rent and park a BIKETOWN bike. BIKETOWN is designed to be affordable and accessible, encouraging even more Portlanders to ride and allowing visitors to experience the city by bike. Portland joins over 60 US cities, including New York, Chicago, Washington DC, San Antonio, Indianapolis, Boise and Austin and 500 cities worldwide that have popular, safe and successful bike share systems. biketownpdx.com

Nike believes in the power of sport to move the world and unleash human potential. As a longtime partner with the City of Portland, BIKETOWN highlights the company’s commitment to make Portland even more active, vibrant and innovative. As the title sponsor of BIKETOWN, Nike designed the innovative visual identity for the program’s standard bike which is the highly identifiable orange that is synonymous with Nike. In addition, Nike oversees the design and branding of the system’s logo, stations and physical presence, as well as a select number of limited-edition bike wrap designs.

Motivate is a global leader in bike share. A full-service bike share operator and technology innovator, Motivate works to re-envision how people experience and move around cities. Motivate operates over 50% of the bike share fleet in North America, including five of the ten largest systems in the US: Citi Bike in New York, Divvy in Chicago, Capital Bikeshare in the D.C. area, Hubway in the Boston area, and BIKETOWN in Portland, OR. Motivate also operates Ford GoBike in the San Francisco Bay Area which is beginning a ten-fold expansion to 7000 bikes. Motivate also powers bike share technology for over 56,000 bikes across four continents. www.motivateco.com