(Aug. 7, 2017) Last week, the Portland Bureau of Transportation fined two contractors who blocked the public right of way without a permit or in violation of a permit. The blockages exacerbated traffic congestion during the busy summer construction season. PBOT will continue to issue fines as needed to prevent unnecessary traffic congestion.

On Monday, July 31, Columbia Construction Service blocked a turn lane and a through lane just west of the Burnside Bridge, narrowing the street to one lane westbound during the morning rush hour. This closure caused extreme congestion, which delayed public transit service and other road users.

On Thursday, Aug. 3, PBOT ordered Turner Construction Co. to stop all work in the center lane of SW 12th Avenue, between SW Morrison and SW Alder. The company's permit only allows the closure of the right lane.

After receiving complaints and photographic evidence, both companies were fined last week.

Fines for unpermitted work in the right of way or violations of existing permits are added to a construction project's building permit. Time-sensitive building inspections are not conducted until a permit holder pays outstanding fines.

"Amidst one of the busiest summer construction seasons in recent memory, I’m disappointed at the blatant disregard for the public," said City Commissioner Dan Saltzman, who oversees PBOT. "With the Get Portland Moving effort underway this year, City staff have been working diligently to coordinate the timing of many different public works projects to ease congestion as much as possible. For a private construction company to block a lane during rush hour, delaying thousands of people and undermining our efforts to reduce traffic congestion is unacceptable. We will hold them accountable."

While PBOT has approved many downtown-area lane and sidewalk closures for construction projects, the Bureau seeks to avoid closures during morning and afternoon peak travel periods. PBOT's permit review process helps coordinate closures to reduce the impact on the traveling public. 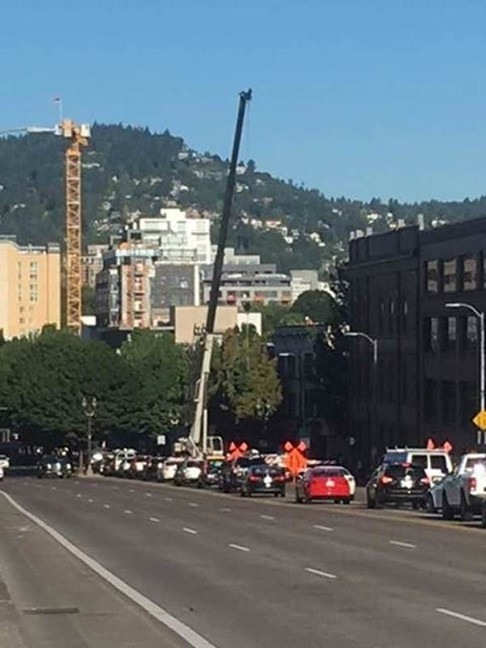 PBOT has fined Columbia Construction Service for causing significant traffic congestion on West Burnside during the morning rush hour on Monday, July 31, 2017. This picture shows how Burnside was narrowed to one travel lane. (Photo provided by a concerned constituent.) 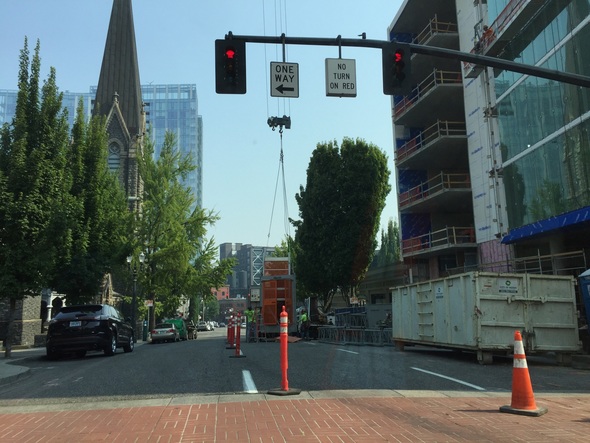 PBOT has fined Turner Construction Co. for violating its permit by closing the center lane of SW 12th Avenue. The approved permit only allows closure of the right lane. (Photo by Portland Water Bureau.)

PBOT inspectors check for construction permit violations, but we need your help as well!

Report concerns about work zone violations using PDXReporter.org and a work zone request will be created for our staff to review.