Before and after renderings (looking west) of the new intersection being installed at NE 128th and Glisan Street. These improvements will make it easier for Menlo Park Elementary School families to get to school and easier for pedestrians and people biking to cross from the new 130s Neighborhood Greenway.

(July 17, 2019) Work begins next week on NE Glisan Street between 122nd and 148th avenues to increase safety for pedestrians, people biking, and people driving along this High Crash Network street. This is the first of three segments of improvements planned for NE Glisan Street, with additional work between NE 148th and 162nd avenues scheduled this August. Additional safety improvements between NE 102nd and 122nd avenues are scheduled for installation next year.

NE Glisan Street is the fourth most dangerous street in Portland for people traveling in motor vehicles and the ninth most dangerous street for pedestrians. In the last decade, five people have died on NE Glisan Street between I-205 and NE 162nd Avenue: Three people in cars and two pedestrians. From 2006 to 2015, 46 people suffered serious injuries while travelling on this same stretch of road. Of these serious injuries, 41 were sustained by people in cars, two were people biking, and three were pedestrians. 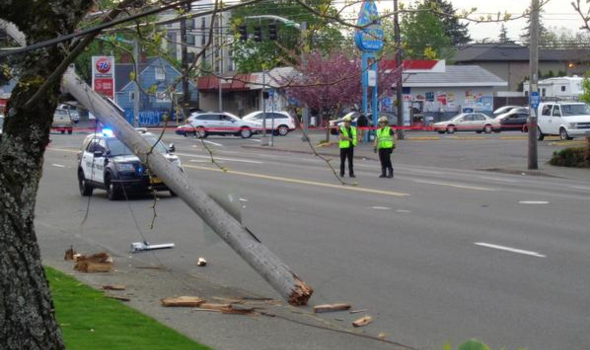 A single-driver crash that occurred at 6:50 p.m. on April 25, 2019 at NE 103rd Avenue and Glisan Street. The crash caused power to go out at over 3,600 households. Hundreds of drivers were detoured onto local streets while NE Glisan Street was closed for hours between 102nd and 104th avenues. (Photo courtesy of a Glisan Street neighbor.)

Highway-style streets like NE Glisan Street divide neighborhoods and make it nerve-wracking for kids to walk or bike to school, or families to walk to parks or the store. Long stretches of road between signals mean people drive too fast, making it unsafe, and sometimes deadly, to cross the street.

Rendering of NE Glisan Street at 125th Avenue, looking west. There will be no changes to the number of lanes within three blocks of major intersections in order to keep a left turn lane and two through lanes adjacent to these major intersections.

To address the most dangerous parts of NE Glisan Street, the street will be updated into three lanes from NE 106th to 119th, from 125th to 145th, and from 150th to 160th avenues. A signalized bicycle and pedestrian crossing will be installed at NE 128th Avenue as part of the 130s Neighborhood Greenway, a new north-south route for biking and walking. The number of lanes will remain the same within three blocks of major intersections to keep a left-turn lane and two through lanes open in each direction. Between NE 102nd and 122nd avenues, Glisan Street will also feature a buffered bike lane (eastbound) and a parking-protected bike lane (westbound). Parking-protected bike lanes will be installed in both directions from NE 122nd Avenue to the eastern city limit at NE 162nd Avenue.

PBOT crews will be begin work on NE Glisan Street between NE 122nd and 148th avenues starting July 22 and continuing through late August. Our crews work from 7 a.m. to 6 p.m. All vehicle travel lanes will stay open at major intersections along NE Glisan Street from 7 to 9 a.m. and from 3 to 6 p.m. Pedestrian and bicycle access will stay open at all hours, along with access to side streets. Learn what you can expect in our work zones and how you can help everyone stay safe by watching this video: https://youtu.be/lx3RkJjkjSE

The aim of the East Glisan Street Update is to achieve the goals articulated by the community and Portland City Council to improve safety, provide more transportation options, and improve access to jobs, parks, libraries, transit, and more. Some of the safety goals outlined in the project include: reducing top-end speeding (more than 10 mph over the speed limit); reducing the severity of crashes in support of Portland’s Vision Zero mission to eliminate traffic deaths and serious injuries; making it easier and safer for neighbors to cross the street and connect to public transit; and making it clearer where pedestrians, people biking, and people driving are supposed to be so the road is safer for everyone. To see more details of the project, including photographs and renderings, see this interactive story map and project evaluation guide. 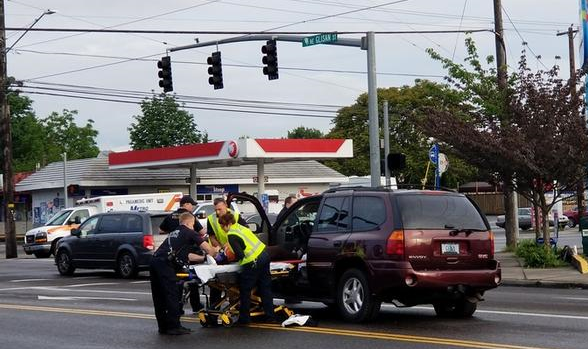 A crash at 6:55 a.m. on May 21, 2019 that required police and medical response. One person was transported to the hospital for injuries sustained in the crash. (Photo courtesy of a Glisan Street neighbor.)

For too long, East Portlanders have borne the brunt of the city’s traffic violence. East Portlanders are at greater risk to be injured or killed in a traffic crash and disproportionately represented in the city’s crash data. A pedestrian in East Portland is 2.3 times more likely to be hit by a motor vehicle than a pedestrian in more central Portland neighborhoods. This is due to East Portland’s wide streets that have historically prioritized the speed of motor vehicles above everything else, including safety. PBOT’s Vision Zero mission has put motor vehicle speed within the context of larger community goals related to traffic safety, more transportation options, and better access to opportunity.

PBOT would like to acknowledge and thank the community partners who championed these safety improvements to NE Glisan Street. East Portland neighbors involved in the East Portland Action Plan and East Portland In Motion have for years highlighted the need and urgency for safer access to public transit, and biking and walking routes.

The total estimated cost for improvements to NE Glisan Street east of NE 122nd Avenue is $400,000.  Funding for this portion of the project comes from federal highway funds administered through Metro and the Oregon Department of Transportation. PBOT applied for these grant funds after East Portland residents prioritized and articulated their goals so clearly through East Portland In Motion. Additional funding comes from PBOT's transportation system development charges and Portland’s cannabis tax.